Ability to Say NO

The phrase time is money is held with deep regard by business owners and other successful people. They guard their space and time zealously and refuse to let anyone step in unless they want. Of course, the reality is that one person or a few persons cannot completely manage the entire operations of a business and it becomes essential to hire people who would do that for you. Every business has its share of roadblocks, distractions and upheavals but it those businesses and people who can manage these, who are successful. One of the main causes of being able to deal with these diversions is their ability to say no. The quote by Anne Lamott thingsicantsay.com – “No” is a complete sentence. It does not require justification or explanation” – amply sums up why saying no is a perfectly acceptable standard and norm. 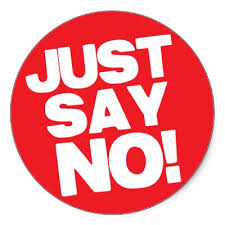 I have met a number of people who actually feel debilitated because they are unable to say no. These people are highly stressed, frustrated, have trouble maintaining relationships and often face failure because of their fear of saying no. While they realize that this inability robs them of priceless time to do value-added activities, they are powerless. The fact is that most people seem rushed and frenzied because they probably do a number of activities in the day that they could just have easily said no to.

So why are people so afraid of saying no? Why are they unable to resolve to grow and develop this capability? It would seem first and foremost is the lack of faith on the capabilities and intentions of those around them. It is a mental block of sorts, which disallows a person to entrust or delegate tasks that they have been doing themselves. They believe that managing everything on their own is the best way. Such people must develop the capability of saying to no to the desire to do every task on their own. No one lives in a vacuum or silo and hence cultivating the habit of inter-dependence is the most crucial first step towards success.

Each single day brings with it challenges, diversions and other tasks that we may not be prepared for. While this is the reality, it is not necessary to respond to each such distraction – developing the ability to say no to such demands will leave one a lot more peaceful, happier and with more time to do things they want.

The inability to say no is an offshoot of fear and feeling guilty that one might hurt another’s feelings – especially of those who are dear to us. Cultivating the habit of being honest and polite helps – saying no does need to be aggressive. Instead, it is best that the truth be told as to the reason for saying no – if you are unable to comply with a request – be upfront and let the person know. People who care about you will understand your need to attend to priorities and other important tasks – those who don’t – well, you are better off without them.

Saying no may seem hard – but it is absolutely essential that it is developed and used appropriately. It is a skill, that thankfully can be learned and over time it can be mastered leading to less stress, more time and better management of relationships.